Despite the proliferation of recipe websites and apps, finding and organizing the recipes you want to cook has somehow become more difficult over the years. Recipe sites are overrun with ads and long-winded personal stories, while many apps ignore the fact that many of today’s consumers want to shop for groceries online, not by making a shopping list to take to the store. Today, a company called Whisk is launching a new meal planning and recipe finding service that helps you better organize your recipe collection, as well as easily shop for recipe ingredients from a range of grocery delivery providers, including Walmart, Amazon Fresh, Instacart and others.

Whisk itself was acquired by Samsung NEXT in March of this year, after tripling its revenue, achieving profitability and powering more than half a billion recipe interactions per month.

Now, it’s out with its new cross-platform experience, which includes a website, mobile apps and a voice assistant, all designed to make it easier to meal plan, make and share lists and, finally, shop.

To be clear, Whisk is not another recipe site. Instead, it’s a way to save the recipes you find elsewhere.

The recipe site clutter has gotten so bad, it’s gained media attention and outcry from users. And while many people today still pin to Pinterest recipes they like, I’ve personally gotten so fed up with the mess that I’ve taken to just copying into Apple Notes the recipe text and a photo instead. Whisk, however, has me reconsidering my current system.

After signing up for Whisk, which can be as simple as providing an email or phone number if you don’t want to use Facebook or Google login, you get started by adding a URL of a recipe you found on the web.

On a site like Pinterest, the link is just saved to your account and you move on. But Whisk goes further. It extracts and structures the pertinent information from the site, like the recipe title, photo, ingredients, serving time and more, and places them into the appropriate fields on its recipe entry form.

Unfortunately, in tests, it doesn’t seem to pick up the recipe instructions, but you can copy and paste these in separately. You can also write a description, add notes or even add, edit or remove ingredients based on your own personal tastes. The recipe, which links back to the original source, can then be saved directly or added to a collection of your own choosing on Whisk.

When you later go to cook the recipe, you can view it without all of the recipe site’s mess and advertisements.

To be fair, the process of saving recipes this way takes a little more time than just hitting the “Pin It,” button. In some cases, Whisk doesn’t pick up the photo. Other times, you’ll want to go back to add more details beyond the cooking steps, like a link to the recipe’s YouTube video, for example.

But there are advantages that come with taking the extra few minutes on the recipe entry. Beyond just the organizational aspects, Whisk also brings its smart technology to the meal planning process. Once added, every ingredient is identified with a small photo icon as a visual reference and Whisk calculates the recipe’s nutritional aspects and gives it a “health score.”

This aspect is powered by Whisk’s “Food Genome,” a deep learning, natural language-based algorithm that maps ingredients, their relationships and their properties like nutrition, perishability, flavor, category and more. Today the Whisk ecosystem sees more than 500 million monthly interactions, the company says.

Whisk also lets users click a button to scale up or down the recipes to different serving sizes without having to do the kitchen math in your head (or a lot of googling.) 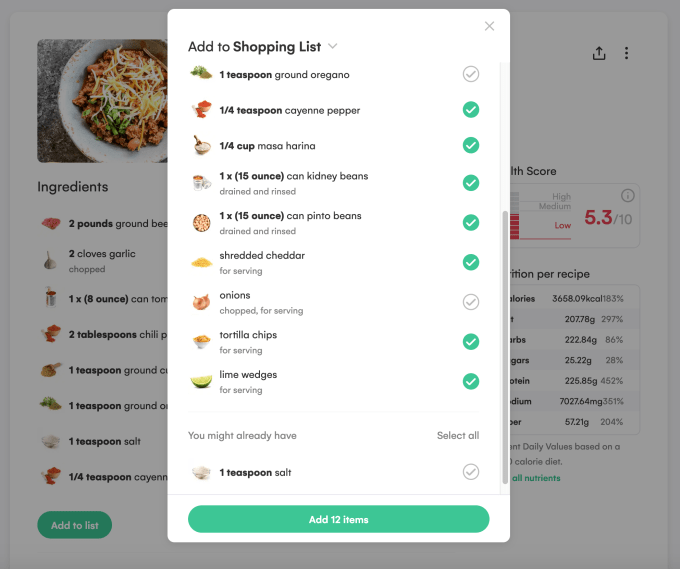 And when you’re ready to shop the ingredients, you just tap a button to create a list where you can select and deselect the individual items you need. This list can be shared over SMS, email or by URL, allowing others to view, edit or save and shop the items you need. Whisk’s voice apps, including those for Bixby, Alexa and Google Assistant, also let you add items to your list, hands-free.

You can then select from which store to shop, based on the online grocery delivery services available in your region. This is an area where Whisk outshines many recipe app competitors, which tend to overlook this final step.

At launch, Whisk supports 29 online grocers globally, including major companies like Walmart, Instacart, Amazon Fresh and PeaPod in the U.S., plus Tesco, Ocado, Waitrose, ASDA and Amazon Fresh in the U.K., as well as GetNow, Woolworths, REWE and others in various overseas markets. 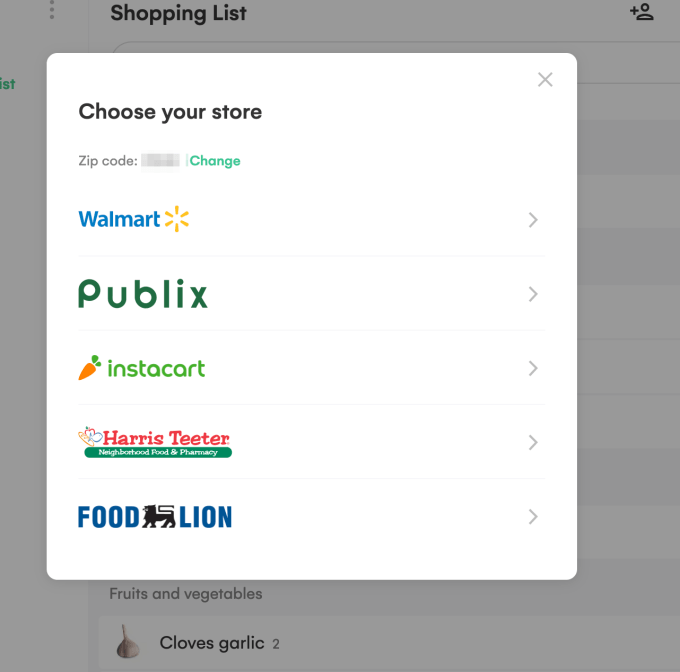 “Over half of the U.S. population still makes shopping lists using pen and paper, yet most people are looking for food inspiration digitally,” said Nick Holzherr, head of Product, Whisk at Samsung NEXT, in a statement about the app’s launch. “Hours are spent looking for food content online — seeking new and healthier meals. However, the data shows people generally end up cooking the same 7-9 dishes on repeat. There’s a fundamental disconnect between the online and offline that Whisk can help connect,” he added.

The company also notes that 70% of the U.S. population is expected to buy from online shopping services by 2025.

As more people shop online, Whisk will grow its service’s revenues as it takes an affiliate commission on some grocery checkouts.

Today, Whisk is available online, as a Chrome extension and on Android, Alexa, Google Assistant, Bixby and soon iOS.